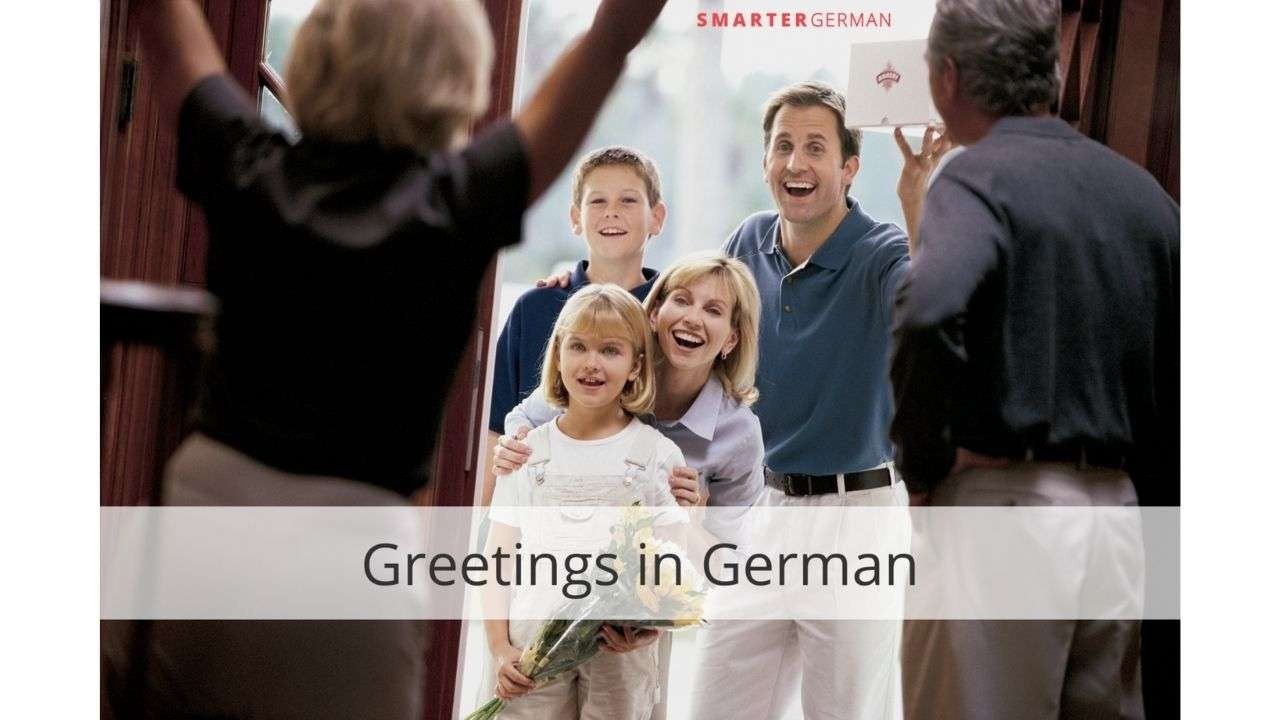 Knowing how to say “Hello”, “Goodbye” and “Thank you” or “Nein, Danke.” in German is not just one of the basics you need to know when you want or have to interact with German native speakers with greetings in German.

You also need to consider the regions where you encounter Germans. Because in addition to the standard phrases “Hallo”, “Guten Tag”, “Auf Wiedersehen” and “Danke”, which are used everywhere, there are also numerous regional expressions.

How to say Hello in German

Depending on the time of the day you can always use “Guten Morgen” (Good Morning), “Guten Tag” (Good Day), “Guten Abend” (Good Evening), and “Gute Nacht” (Good Night). “Gute Nacht” you usually say only to someone who is going to bed and therefore is rarely used with non-friends or non-family members.

“Hallo” usually works everywhere and at any time; the same for  “Hi” and “Hey”. Here we just need to keep in mind who you talk to. Very generally, if you do not know the person or you speak to someone who is very likely older than you, always use the more formal way of speaking. For example, if you greet your bank account manager or an elderly lady you should not say “Hi” or “Hey” since it would be considered impolite. Better go for “Guten Morgen/ Tag” or “Hallo”.

In case you are already bored of saying “Hallo” a hundred times per day and you would like to enrich your vocabulary, you can also say “Hallöchen” and even extend it to “Hallöchen Popöchen”. But attention: this is a very colloquial expression and may be used for friends only! “Hallöchen” is the diminutive form of “Hallo” and has a funny connotation.

“Popöchen” is the diminutive form of “Popo” (which is the word Germans teach their kids to use instead of the adult version “Arsch”) and has besides its funny connotation also a slightly suggestive one. So, you can use it as a funny way of saying “Hallo” to someone you know very well. Moreover, you can use it when you go out with your friends for example, and see someone you like. Instead of saying “He is hot” you would say - while looking after the person - “Hallöchen Popöchen” and everyone would understand that you like the person. However, you should not say this directly to the person since she will find it rather rude than funny.

From North to South

The shortened version “Tach” is used in Northern Germany and in North Rhine-Westphalia. “Guude”, which is a shortened version of “Guten”, you can find in Hesse and Northern Rhineland-Palatinate. In the area, the greeting can also be used as a farewell. You might have heard already “Guten” in a different context since it is also used by some people as a short version of "Bon appétit”. So do not get confused if you encounter someone on the street and he says “Guude” to you. By the way, in Hesse instead of “Guten Morgen” you will most likely hear “Gemorje”. And in Berlin and Brandenburg, where the dialect often changes “g” into “j”, people often say “Juten Morgen” or Juten “Morjen”.

Another typical Northern German greeting is “Moin”. For someone who does not come from North Germany this phrase might be confusing since it derives from “Morgen” but can be used at any time of the day. Some people even double it and say “Moin Moin”. Moin on its own is equivalent to “Tag”, “Moin Moin” means “Guten Tag”. Younger people also use “Moinsen” in the north.

Going from the North to the South of Germany and to Austria you will hear very often “Grüß Gott” (dialect: “Griaß Gott”) which literally means “Greet God”. Especially in rural areas it is still widespread. Instead of “Grüß Gott” some people prefer to say “Grüß dich/ Grüßt euch” (dialect: „Griaß di/ eich”) or “Servus” due to its secular meaning. So this is completely up to you. However, you can also use “Servus” as a farewell.

The word “servus” is related to the word “servant” and basically means “at your service”, not really used in this sense anymore nowadays.

In the German speaking part of Switzerland, the most common greeting is “Grüezi/ Griezi” (from “Grüße Sie”) or “Grüessech” (Grüße Euch). Family members and close friends use “Hoi”, which is originally a shout-out by the shepherds to drive their cattle. “Sali” (from the French word “Salut”) and “Tschau” (from the Italian word “Ciao”) are another casual way of saying “Hello” but can be used for saying “Goodbye” too.

How to say Goodbye in German

Like “Hallo” and “Guten Tag” you can always and everywhere use “Auf Wiedersehen” (Goodbye) and “Tschüs” (Bye).

However, like for the greetings, there exist several regional phrases for how to say “Goodbye”.

Let’s start in Bavaria and Austria. As mentioned already above, you can use “Servus” as a farewell. Moreover, instead of saying “Auf Wiedersehen”, in Bavaria it is more common to say “Auf Wiederschau’n” (“schauen” is another word for “sehen” which means “to see”). You will also hear, especially in Austria, “Ba-Ba” (it might derive from the English “Bye-bye”). Other farewells in Bavarian are „Pfia God“, „Pfiat di God” or “Pfiat  eahna” (formal) and “Pfiat di/ eich“ (familiar). There even exist more expressions but these are the most common ones and will be enough to impress Bavarians.

Bavarian is the German dialect spoken in Bavaria and Austria. Despite this fact, Bavarians and Austrians do not really seem to be best friends.

In Switzerland people say “Uf Wiederseh”, “Uf Wiederluege” (“luege” is preserved from High Middle German “log.en” which is very close to the English word “to look” ), “Tschau” (from the Italian “Ciao”) or like in French “Adieu” or the modified form “Ade”. “Ade(e)” you will also hear in the area of Baden and Swabia, and typical for Swabian you might also hear it with “le” as “Adele”.

If it comes to the word “Tschüs” there exist numerous versions. “Tschüssi”, “Tschöö”,  “Tschüssikowski” (which is considered to be a remainder of GDR times) or “Tschüssing” (mostly used in Mecklenburg-Western Pomerania), “Tschüs mit üs” or “Tschö mit ö”.

There are plenty more rather silly goodbyes. Check this page if you want to up your social game. Funny enough, the Bavarians vehemently resist “Tschüs” and try to avoid it like the devil the holy water. In 2002 there was even a school director in Passau who forbade her students to use the word (and even “Hallo”)!

There are two theories where the word “Tschüs” derives from. The one considered to be proven is the fact that “Tschüs” has developed from the old Low German (spoken mainly in Northern Germany and the northeastern part of the Netherlands) word “Atschüs”, which was still in use until the 1940s. According to the first theory, “Atschüs” comes from the Wallon word “adjus” which means “to God”. The second theory assumes that “Atschüs” goes back to the Spanish word “Adíos” which also means “to God”.

When you are on the phone talking to someone you do not know or do not know very well you say “Auf Wiederhören”.

Of course, you can extend all farewells and add the following phrases:

But how about nonverbal communication? Do you need to shake hands or to give a cheek kissing or maybe rub noses? Well, this depends on who you encounter.

If you meet someone for the very first time the most common greeting is a handshake. Whereas if you meet close friends you may hug them or give them a cheek kiss. Unlike in some other countries, there is no rule regarding the number of kisses. However, usually, you give one or two kisses. But do not worry: if you are not the kissing type of person shaking hands is always completely fine!

In times of Covid-19, alternative forms of saying “Hi” and “Bye” have come along.

You might see people touching each other with their elbows or even with their feet. Fist bumps are also used among the younger population (anyone below the mental age of 50). Others like to give “air kisses” or pretend to hug each other while hugging themselves. There are also many people who do none of these let us say rituals and simply say “Hallo” and/ or just nod. With regards to the future, we will have to wait and see to what extent Covid-19 will also have an influence on the way we all greet each other.

How do I say “Thank you” in German

In all German-speaking countries you can use “danke schön” or just “Danke”.

Those of you who find “Danke” too simple and would like to put more emotions in their vocabulary, can also say “Herzlichen Dank” (the word “herzlichen” comes from the German word “Herz” which means “heart”). Beside this expression, you will also hear “Vielen Dank”, “Danke vielmals”* or “Vielen herzlichen Dank”.

You can easily recognize a person from Switzerland when they thank you because they say “Danke vielmal” which sounds off to German ears.

In addition, in German federal-states which are bordering to France (namely Baden-Wuertemberg, Rhineland-Palatinate and Saarland) you can say “Merci” as well.

In Bavaria and Austria, you might also hear “Vergelt’s Gott” (dialect “Fa´gööd´s-God”) or  "Gejds God" which has a Christian background, and the dialect form of “danke schön” which is “Dang schee”. Whereas in Hessen someone might say to you “En Haufen Dank” instead of “Vielen Dank” meaning as much as “A heap of thanks”.

How to respond to Danke

With regards to responding to “Danke” the most common phrases are “Bitte”, “Bitte schön”, “Kein Problem”, “Keine Ursache” (Don’t mention it,, literally: no reason) , “Gerne” (with pleasure) or “Gern geschehen” (it happened with pleasure). As you can see, there are plenty of options.

A specific phrase which is used in the North of Germany is “Da nich(t) für” and means literally “not for that”. And last but not least, if you would like to point scores with someone in Bavaria you respond to “Vergelt’s Gott” with “Segen's Got”' (dialect “Sengs God”, meaning: May God bless it) oder “Zahl's Gott” (May God pay for it).

Is your head spinning now? Do not worry! As mentioned already above, you can always use “Bitte” or “Bitte schön”.

As you can see, like in any other language there are plenty of options to express yourself. Do not feel under pressure using and knowing all these phrases. Rather take it as an opportunity to get more familiar with your environment, to enrich your vocabulary, and to make people smile maybe by surprising them with one or two of the more unusual phrases above.