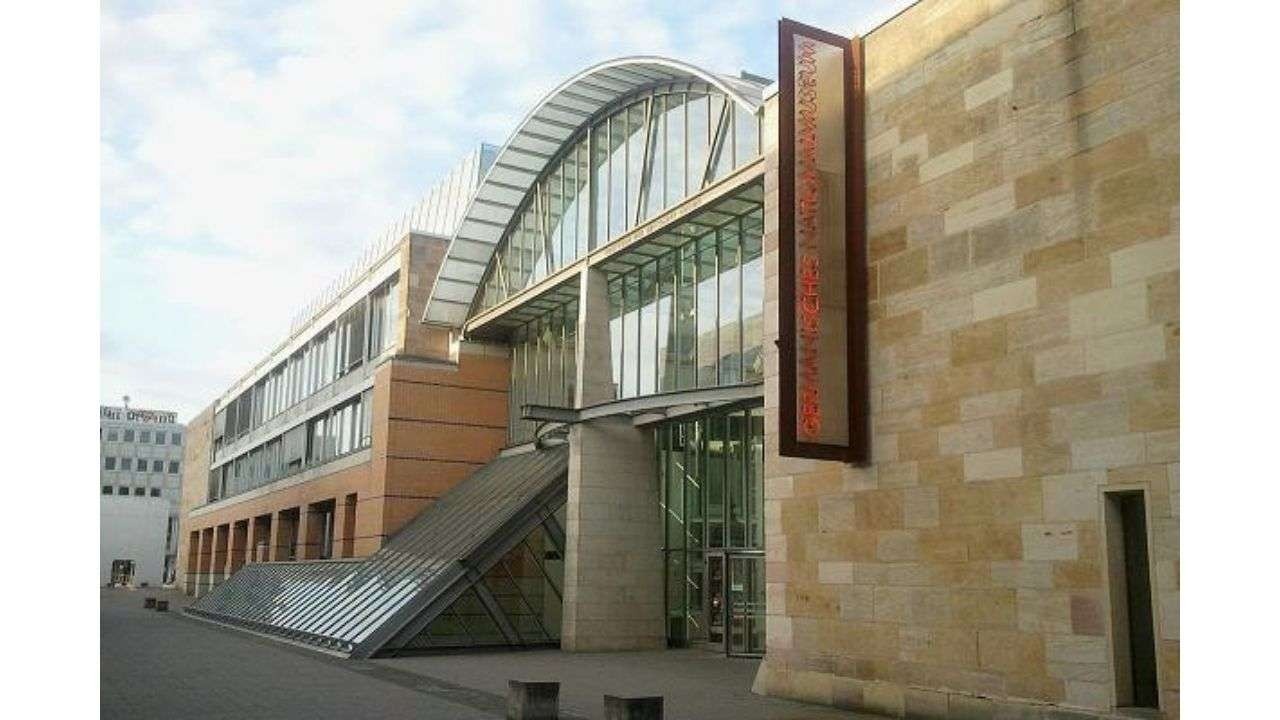 We’re in the 164th year of this superb museum’s glorious history and, if you want to immerse yourself in German culture, regardless of the particular cultural or regional strain in which you’re most interested, e.g., Prussian, Bavarian, Austrian, Swiss, etc., the Germanic National museum will provide you with the best examples and interpretations of what has brought German culture, traditions, mores, and enviable work ethic—assets that continue to influence the descendants of 18th-, 19th-, and 20th-century emigrants in far-flung lands as well as contemporary Germans throughout Germany—to the forefront of international respect.  It has been a struggle, to be sure, but the struggle has been worthwhile.

The museum’s noble founder, Hans Baron von und zu Aufseβ (1801-1872)), studied law at Erlangen and worked in the courts in Bayreuth and Gräfenberg.  The Baron’s interest in German culture and history led him to establish the museum in 1852.  Ironically, a group of enraged students at Strasbourg University, mistaking the baron for a loathed Francophile, attacked and injured him so badly that he died 20 years later.  German nationalism and Romanticism were integral components motivating the baron.  That he should die as a result of his two favorite themes, while sad, is poetically fitting.
A trip to Germany demands that one spend several days in Nürnberg and, if you’re in Nürnberg, you owe it to yourself to visit this museum, which embodies all things German.  The museum’s published doctrine to fulfill its inherent duty to both history and humanity is that “As a museum dedicated to the culture and history of German-speaking regions, we collect and preserve cultural, artistic, and historical artifacts ranging in date from the dawn of Germanic cultures to the present day.”

The museum has 23—count them, 23!—distinct collections:

Go to http://www.gnm.de/en/collections/ for in-depth information about each of these collections.

On your visit to the museum, be sure to see these five very important works:

The “Cloth of St. Gereon,” a seven-color mural tapestry (the second oldest known) from the early 11th century, that shows a griffin (a mythical creature with the body of a lion and the head and wings of an eagle) attacking a bull.  The cloth’s provenance seems to be from St. Gereon’s Basilica in 11th-century Köln.

The “Portrait of Barbara Dürer” by Albrecht Dürer (21 May 1471-06 April 1528).  This selection is one of a pair of oil on pine panels Dürer painted in 1490 of his mother (Barbara) when she was about 39 years old and his father (Albrecht the Elder) when he was about 63 years old.  The panel of his father is at the Uffizi Gallery in Florence, Italy.

The “Lamentation of Christ” by Albrecht Dürer (21 May 1471-06 April 1528).  This selection is also an oil on wood panel and was painted in 1498.  Dürer is thought to have painted the panel for Karl Holzschuler’s family chapel in the church of St. Johannis in Nürnberg.

“Germania” by Philipp Veit (13 February 1793-18 December 1877), a German Romantic painter.  “Germania” was painted in 1848 during the many revolutions, now known as the Springtime of the Peoples, when people throughout Europe, and, to a lesser extent, other nations, rebelled, revolted, rioted, and essentially took matters into their own hands to end the feudal systems that oppressed them and to establish democracies.  Most of the unrest was quelled within the year and no substantive changes came about as a result.  Germania’s unfettered shackles symbolize the freedom sought by those who struggled against their masters; the colors are the colors of the German flag; and the upright sword symbolizes leadership, defense, nobility, justice, and truth.

“The Drinker—Self-portrait” was painted in 1915 by Ernst Ludwig Kirchner (06 May 1880-15 June 1938), a German Expressionist painter and printmaker and one of the founders of Die Brücke, one of the 20th-century’s chief founding elements of Expressionism.  The self-portrait reveals Kirchner’s despair prior to his military training in Halle in the run-up to World War I.  The training, combined with his alcoholism and dependence on Veronal, a barbiturate, precipitated a mental breakdown from which he never fully recovered.  The Nazis branded his work degenerate in 1933 and he committed suicide five years later in Davos, Switzerland.

There are certainly plenty of additional reasons to visit this museum, which was moved to the grounds of a 14th-century Carthusian monastery in Nürnberg in 1857.  As the collections increased in size and importance, the original building and museum complex has been expanded relentlessly.  The research library contains more than 650,000 volumes covering European art and cultural history and its overall holdings include more than 1.3 million items, including more than 22,000 original items that date from the Stone Age to the 21st century.  Also, there are always so-called special exhibitions which bear repeat visits.  At the moment, the exhibit “Between Venus and Luther/Cranach’s Media of Seduction” is scheduled for the 21st & 22nd of May.  The “Historical Models—Works of Art, Media, Visions” is scheduled to run for a bit more than seven months from 30 June 2016 through 05 February 2017 and will mark the so-called Leibniz year (2016).  From 20 October 2016 through 05 March 2017, the “Charles IV” exhibit, a joint exhibit with the Free State of Bavaria and the Czech Republic, will display material dealing with Emperor Charles IV, “. . . one of the most important and multifaceted rulers in Bohemian and Germany history.”  Check out the museum’s website.

The museum is located in the Kartäusergasse 1; 90402 Nürnberg; telephone: +49 (0)911 13310.  Permanent and special exhibitions’ hours are Tuesday through Sunday from 1000 until 1800 & Wednesday from 1000 until 2100.  The museum library is open Monday, Tuesday, Thursday, & Friday from 0930 through 1800 and Wednesday from 0930 through 2000.  The Archive, Department of Prints and Drawings, and Numismatic Collection is open Tuesday through Friday from 0900 through 1600.  Special arrangements are made on public holidays, so please call ahead to confirm hours.  Admission fees are:

adults @ €8; school children, disabled, unemployed, and groups of 10 or more @ €5 (reduced rate); small groups & families (a least 3 persons & no more than 6 persons, with a 2-adult limit); school classes or youth groups @ €1.  No admission fees on Wednesdays between 1800-2100, except for special exhibitions.  If you’re coming to Nürnberg, check out the so-called Nürnberg Card. It could save you a lot of money!