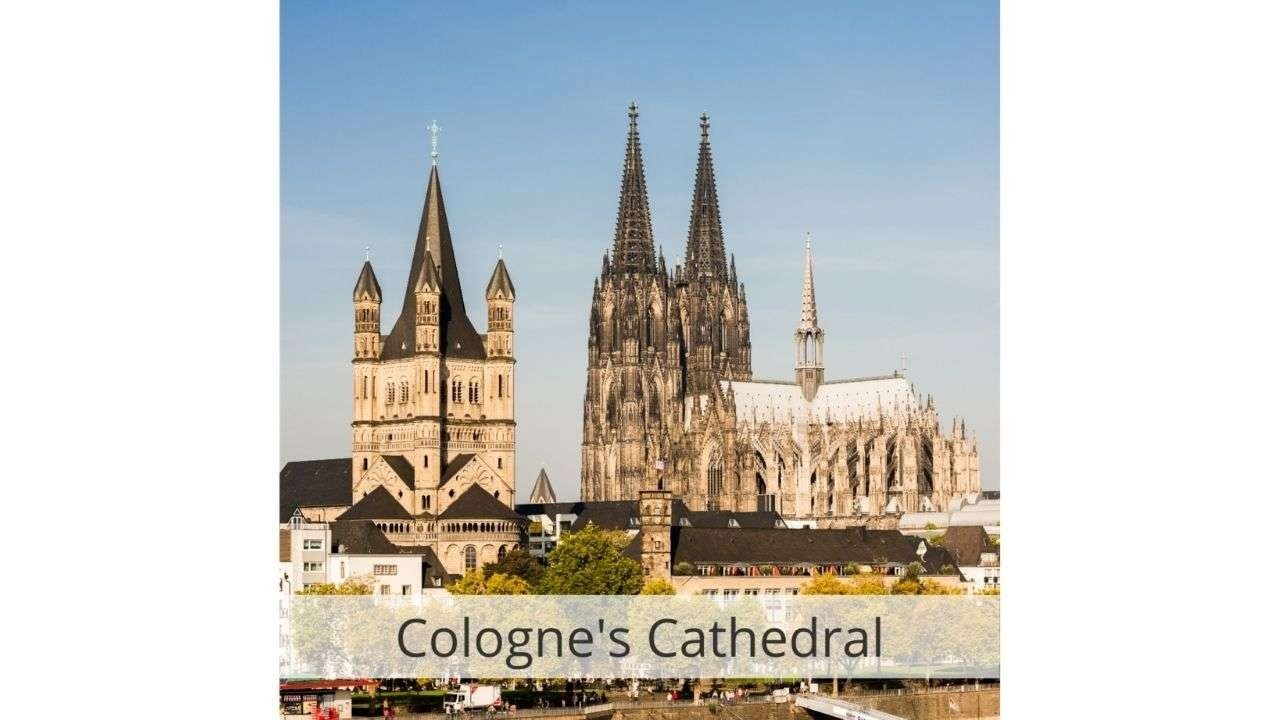 The first time I heard about the city of Cologne, was when I had a French teacher who told a joke in the first class that went like this: “I am from Cologne, but do not think that this means I am always smelling so good.”

By train from the north, you cross the Rhine to arrive at Köln Hbf (The Cologne railway station as we might call it in English). The Rhine is a muscular river and the bridge bulges with iron too.

You are surrounded by what looks like an endless convention center of buildings since Cologne must compete for business with its northern rival Düsseldorf in everything... “Warum gibt es Köln?” wonders the Düsseldorfer... And while Düsseldorf remains the greater convention host city of the two (even rivaling Frankfurt) there is one thing Cologne has indisputable bragging rights over, and that is its cathedral, der Kölner Dom, or simply: Der Dom.

As you make your way through the mass of people at the station and past the inevitable mass of retail shops, food shops, and super heavily attended bathrooms that cost fifty Euro cents to use, (but you have to use at least one euro in the machine and you only get change in the form of a barcode voucher you can only use in selected railway station shops ... or another visit to the toilet) eventually, you emerge outside and you are already in the shadow of the Dom. Your eyes are forced skyward, to the heavens (appropriately) and all the crass plastic corporate signage is blasted from your mind.

In 1857, a famous poet-Düsseldorfer, Heinrich Heine, was once asked why gothic cathedrals don’t get built anymore. His answer was: “In those days men had convictions, whereas we moderns only have opinions, and something more than an opinion is needed to build a Gothic cathedral.” And convictions over six hundred years in the case of Der Dom, which started to be built in 1248 and was not finished with its iconic twin spires until 1880.

During World War Two, it was hit by fourteen bombs, and while it was damaged badly, the building itself held together. One of the most popular types of postcards available in the souvenir shops are black and white images of the bombed Dom.

As you approach through the police cars and their dogs and your eyes keep scanning up the stairs scattered with fellow tourists, you can try and imagine the level of conviction required by pre-industrial workers putting this huge sculpture-like building together.

The closer you come, the more difficult it is to take in, and you start thinking in the back of your mind that it might just be a movie set, a stage-set wooden cut-out, or some kind of projection. It tricks your eyes and your mind. But you can turn your head away and renew your perspective at any time ... not so inside. Here, it really gets overwhelming.

The Notre Dame and the Sacre Coeur don’t match up to the level of grandiosity. The Gothic pillars and the archways drag your eyes in different directions; it’s possible to marvel at everything around you, and then just take a single step to your left or right and these archways and their new alignments re-introduce you to whole new vistas on what is still essentially the same scene.

After fifteen minutes, you have to sit down or leave, your eyes and mind become drunk on it.

It’s almost a relief to get back outside and see a plain unadorned sky. But if you still have the energy, the crypts below are also worth a look. There are some fantastic pieces of medieval gold and silverwork, including a ceremonial sword that must be seen to be believed.

The whole reason there is a cathedral here at all is kept down there: the crypt of the Three Kings, or the Three Wise Men.

If you are lucky enough to be around on a special occasion, such as Christmas or Sylvester you’ll get to hear Dicke Pitter (Fat Peter) the twenty-four tone bell of the cathedral, just to add to the sensory overload. Learning German can be a sensory overload too ... unless you’re smart about it! So ... why not try smarterGerman!