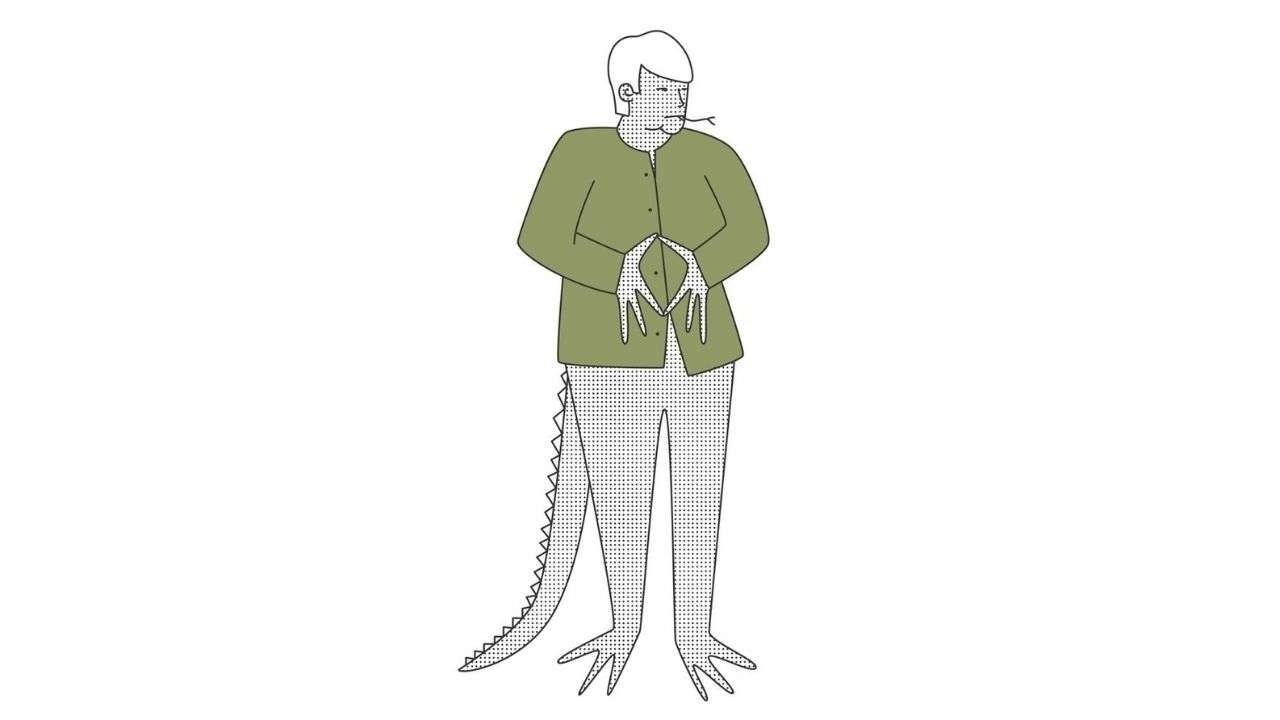 … to some people at least. The idea that high ranking politicians have been replaced by members of the reptiloid family is believed by quite a few “creative” minds out there.

According to those who believe in this conspiracy theory, the Queen, Bill and HIllary Clinton, Barack Obama of course and even the two Bushes are all reptiloids (a reptilian humanoid creature).

One can only guess that the Germans wanted their own representative of the reptiloid family and infiltrated Merkel at one point, completely unnoticed by the public. Or was it noticed?

According to this anonymous Youtuber, Merkel shows typical signs of being a reptiloid.

This is not just some made up fact by some 69 year old right wing sports reporter who possibly ate a few too many magic mushrooms. No. It has been proven in “documentaries” like Mars Attacks. If you haven’t seen that movie documentary, don’t. Not everyone can handle that much truth.

But even if you are still in doubt whether Merkel is indeed one of them, her trademark the Merkel’sche Raute is a blunt give away. The Merkel Raute (=rhombus) © is a symbol for Satan’s all seeing eye.

Well, you might wonder, why you are even reading all this if it is clearly close to nuts to even consider such thoughts as potential truth. And I wondered that myself but here’s the thing:

Since I’m 20 years old I’m interested in the human mind in many different ways. I believed many conspiracy theories myself - and other stuff I wouldn’t publicly confess today - but this one would have exceeded even my imagination’s capacity. Most of these theories are übrigens (=moreover) anti semitic in their nature. And so is also this hanebüchene (=outlandish) idea of reptiloids in high positions.

If you watch the video above to the end they offenbaren (=reveal) their true, extreme right wing, Gesinnung (= true attitude). I actually met a handful of people recently that do believe this without a trace of doubt. And they were smart, educated and highly functional beings and not some Systemfehler (=system error) as one might assume.

There are several ways to deal with Verschwörungstheoretikern (=conspiracy theory supporters). One is beautifully illustrated by the folks running the Denver Airport or by German public TV and another one is to learn to think for oneself. There’s Skeptic.com for English speaking folks but if you want to improve your German hop over to the Gesellschaft zur wissenschaftlichen Untersuchung von Parawissenschaften e.V. or short GWUP.

It’s mind-blowing (=atem beraubend, literally: breath-taking) what human beings can come up with. Why not entertain yourself a bit while learning German by reading about the creativity of the human mind in the field of conspiracy theories?

What is your favorite Verschwörungstheorie? What do you think about these theoriest?

If you’d like to share your thoughts and views in German, now is the time to take your language skills to the next level. And as you are already here, why don’t you take a glimpse at my flagship courses to get from A1 to B1 or if you are already on B1 level, aim for B2? You can preview the first lesson of each course for free. No payment data is being asked from you. Try it and enjoy the beauty of conspiracy free German learning.